A HISTORY OF
THE BRALEY BUILDING 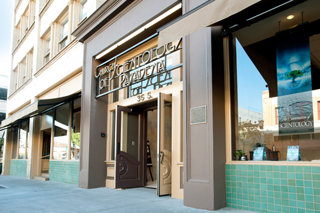 The Braley Building, now home of the Church of Scientology of Pasadena, was originally constructed in 1906 for civic and business leader Edgar Braley. It housed Braley’s bicycle emporium, then with the rising popularity of the automobile, was subsequently transformed into Pasadena’s first electric car dealership.

The design, including the classic Beaux Arts exterior and magnificent galleria, is the work of C.W. Buchanan, one of Pasadena’s most prolific architects.

By the late 1970s the Braley Building, along with the rest of Pasadena’s old town, had succumbed to urban blight and was slated for demolition. A concerted band of citizens joined forces and saved the building—and in so doing, catalyzed the revitalization of the entire historic district. Today, Old Pasadena is listed on the National Register of Historic Places and is one of the most cherished and visited destinations in Southern California.

After acquiring the Braley Building, the Church meticulously renovated and preserved its distinctive architecture and elements. Among these are the historic storefront windows; the original tin-formed ceilings; the Craftsman millwork and square columns throughout; and the atrium’s bicycle-inspired stained-glass windows, as well as its iron balusters and original clocks.

All renovation was planned and executed in accordance with the U.S. Green Building Council’s Leadership in Energy and Environmental Design (LEED) standards. Consequently, the Church stands as the first building to be LEED certified in the historic Old Pasadena district.

The Church was further honored for its preservation of Pasadena’s rich architectural history with the city’s Historic Preservation Award.

Dedicated as the home of the Church of Scientology in July 2010, the building remains a significant tribute to the past and herald of the future for Pasadena.